The first data on the UK Covid vaccine rollout suggests it is having a “spectacular” impact on stopping serious illness, researchers say.

Within weeks, one shot reduces the risk of being admitted to hospital by at least three-quarters for the over 80s.
Researchers said this was particularly impressive as this age group was the most frail and least likely to have a strong immune response.
Monitoring of health staff also shows vaccination helps cut transmission.
So far a third of adults have received a vaccination in the UK.
But questions had been raised about the policy of leaving a gap of three months between first and second doses.
The data from Public Health England (PHE) and Public Health Scotland (PHS) has been published on the day the government in England has set out its roadmap for lifting restrictions.
The research was carried out separately in the two nations, but both studies involved tracking those who had been vaccinated and comparing them against people who had not been.
The PHS study found that, by the fourth week after the first dose of either the Pfizer or AstraZeneca vaccines, the risk of being admitted to hospital had been reduced by 81%.
It was slightly higher when younger age groups were included.
Lead researcher Prof Aziz Sheikh said the results were “very, very” impressive and both vaccines were working “spectacularly”.
“These results are very encouraging and have given us great reasons to be optimistic for the future,” he added. 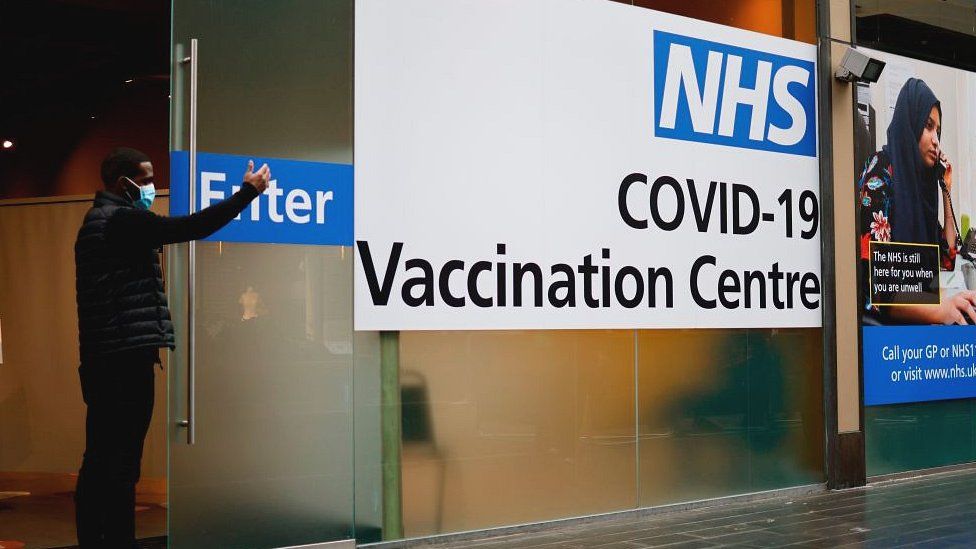 In England researchers followed up those who were vaccinated to see if they became ill, needed to be admitted to hospital and whether they died.
The cut off was two weeks after being given a Pfizer vaccine.
It found vaccination reduced the risk of symptomatic infection by 57%; for those infected the risk of being admitted to hospital was reduced by 40% and then if people were admitted to hospital it reduced the risk of dying by 56%.
Overall this meant, the team said, the risk of being admitted to hospital and dying was reduced by at least 75%.
The PHE team was also able to get an idea of what the vaccine was doing in terms of slowing the spread of the virus.
Health staff who were vaccinated were routinely tested every two weeks whether or not they had symptoms.
One dose reduced the risk of catching the infection by 70% – if an individual is not infected they cannot pass it on.
Dr Mary Ramsay, head of immunisations of PHE, said: “We should be very encouraged by these initial findings.”
And she added the findings for the over 80s were particularly impressive as they were the frailest people who are perhaps least likely to have a strong immune response.
Trials of both vaccines had suggested they would have a significant impact at preventing hospitalisations.
But for the Pfizer vaccine studies, that had involved a second dose being given after three weeks.
The UK has adopted a policy of delaying the second jab of both vaccines by three months, which had led some to question whether the approach would give sufficient immunity.
The trials of the AstraZeneca looked at a longer dosing interval so there was more confidence about that vaccine.
Dr Josie Murray, of Public Health Scotland, said the findings were “brilliant news” and suggested the vaccine programme was working.